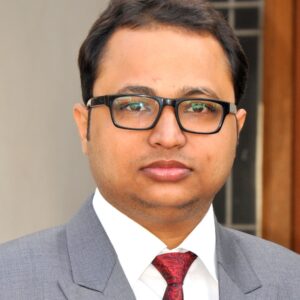 A small river named Duden flows by their place and supplies it with the necessary
Introduction Indian Leopard: The Indian leopard (Panthera pardus fusca) is a leopard subspecies widely distributed in the Indian subcontinent. The species Panthera pardus is listed as Vulnerable on the IUCN Red List because populations have declined following habitat loss and fragmentation, poaching for the illegal trade of skins and body parts, and persecution due to conflict situations.[6] In 2014, a national census of leopards around tiger habitats was carried out in India except the northeast. 7,910 individuals were estimated in surveyed areas and a national total of 12,000-14,000 speculated.[2] Study Area: Nahargarh Wildlife Sanctuary and Jhalana Conservation Reserve, Jaipur, Rajasthan 26.9260° N, 75.8235° E (Degree Decimal). These two forest divisions are considered to be the most leopard-populated regions of the Jaipur Forest Area. Most of the leopard conflicts with humans occur in these two forest divisions as there is ever increasing presence of human settlements close by. The forest vegetation that accounts for 8.19% in Rajasthan is deciduous and has thorny trees, grasses and shrubs.[9] The tree species found are Babool, Dhonk, Amaltas, varied species of Acacia and Khejri, etc. Numerous species of herbs and plants that have medicinal value are very common here. The forests consist of sandstone and quartzite rocks and the foliage typically symbolizes the sultry dry deciduous and muggy bristle forests. At present, there are approximately 18 leopards in Jhalana Reserve Forest and 8 leopards in Nahargarh Wildlife Sanctuary and according to the forest department there are 26 leopards in Jaipur forest area besides deer, blue-bull, fox, wolf, sambhar, hyena, jackal and several other species. Problem Overview: The leopard is an important animal in the ecosystem of Jaipur forest area. It occupies the highest trophic level. The main problem arising for the survival of the leopards in Jaipur forest area is the illegal/legal encroachment by humans in the fringe area of the forest due to which this magnificent carnivore has started moving out of the forest and has been sighted frequently in and around the villages of the forest. The intensity of these sightings and encounters has risen over the years and is still increasing. Proper mitigation techniques and conservation guidelines need to be implemented in order to safeguard these magnificent carnivores. As an animal which has learnt to adapt itself to the fast changing landscape, it is also the most maligned in the Indian context, bludgeoned to death, poisoned or even burnt alive, by the so-called “civilized society.” The animals are hard-pressed from all directions, forcing them to come into conflict with humans. Rise in human settlements around the Jaipur forest area has increased human interference inside forest area. The mere presence of a leopard in an area does not mean that it has to be removed. Certain monitoring protocols have to be devised in order to mitigate this problem. Review of Literature Table 1.1 Recorded leopard sightings in the past years (2011-2017)   Materials and Methods Survey: Data related to human leopard conflict, leopard status near villages, leopard’s social behavior around forest area, etc, was collected by means of many questionnaire surveys conducted from 26th July to 10th August 2016 in the fringe villages of the given forest area. We started survey work on 26th July from Nahargarh Wildlife Sanctuary and finished the survey work at Jhalana Reserve forest on 13th August 2016. Scientific and Indigenous Mitigation Techniques:   Results and Discussion Survey: On the basis of a scale prepared, we graded these conflict zones from highest to lowest level of conflict. 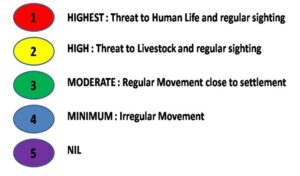 We conducted surveys and marked waypoints in GPS of the conflict areas. We surveyed 79 villages in fringe areas of these two forests, out of which 18 villages showed rare or no leopard movement, 22 villages are suffering from conflict situations, but 39 villages are in major conflict zones.   Table 1.2 Number of villages and colonies in identified conflict zones Scientific and Indigenous Mitigation Techniques: 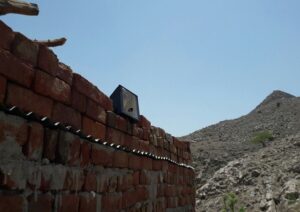 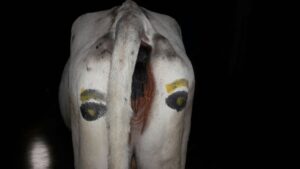 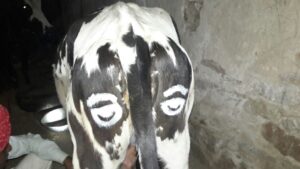 Fig 1.3 “I-Cow technique” on cattle of affected villages The outcome was that the cattle with eyes painted on their rump were not attacked by leopards. Not a single case of leopard attack has been seen since this technique was implemented. We analyzed the results of the situation before and after this technique were carried out as well as compared the threat level to cattle with and without rumps painted with eyes. 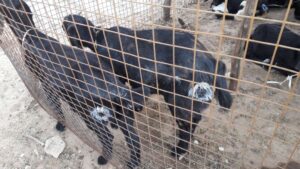 Conclusion This study enabled us to become fully aware of the rampant situation in forest fringe areas. Regular visits to the conflict areas brought out many unknown problems. Mitigation techniques including metallic livestock sheds cages, I-Cow technique, halogen lamps and cattle bell technique have been implemented in conflict hotspots. These mitigation techniques were implemented to reduce the dependency of leopards on livestock. By constructing metallic livestock sheds leopards stopped coming in villages with these sheds because there was no easy food available in those areas. I-Cow technique was done on about half of the cattle population in forest fringe area. I-Cow technique surprises the predator which gives extra time to the prey to escape. In this way we reduced the attacks inside forest fringe area. Conflict prevention, such as live monitoring interventions, could also be improved with maps that were developed during the survey that identified vulnerable villages. References